skip to main | skip to sidebar

Do you guys know most apartments in Brooklyn have virtually no kitchen? This is what I am discovering after looking at more than 25 apartments in the last month or so. I don't cook all that often so I can live without a palatial kitchen and sometimes a small space just means you get to be exceptionally creative with storage and presentation. Is anyone else out there as thrilled with this challenge as I am? Here are a few photos for inspiration: 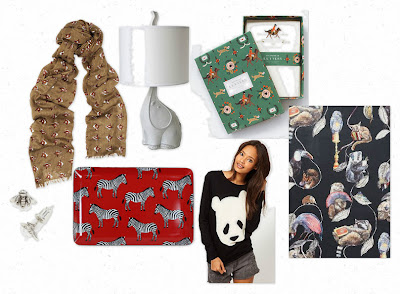 Email ThisBlogThis!Share to TwitterShare to FacebookShare to Pinterest
Labels: Things We Should Own

A wise man once said, You can't always get what you want. That man was Mick Jagger (DUH) and he was correct. Also he sang it ,which means it must be extra true.

Back in July, when I was young and full of hope, I announced to my two readers that I would be moving and getting my own place and then treated everyone to a list of things I would have in my super shiny, adorable first apartment here in New York City.  I felt like Mary Tyler Moore, exuberantly tossing my hat up into the air with newfound independence.

I was going to make it after all, god damn it.

But then, life happened.

My moving date was set for Sept 29th. New tenants were scheduled to move in a few days later. Despite months of planning and saving, I still struggled to save enough money to accommodate the initial moving and broker costs. Brokers were standing me up or presenting me with apartments listed at several hundred dollars over my target rental price. One broker flat out laughed at my expectation that I'd find something reasonable that didn't look like a rape den. My moving date was rapidly approaching and I was finding fewer and fewer listings in my price range and desired neighborhoods, even though I'd branched out to consider neighborhoods I'd barely heard of. With only two weeks to go and no movers booked, I started frantically emailing people with rooms to rent.

'I'll just save money by having a roommate and then I'll also treat myself to something fun like customized upholstered cushions for my armchair. That will make it worth it', I told myself. I am a person who appreciates consolation prizes.

I emailed about 50 people who had posted ads on Craigslist. I received maybe a dozen responses. One of them was an offer of a small furnished room in exchange for topless massages. I was able to set up appointments to look at a handful of apartments but most of the people who originally responded never followed up. I was promised a room and then the renter changed their mind not once, but TWICE.

Now, I'm a responsible, fully-employed adult who is friendly and fairly down-to-earth. I have verifiable income. I don't look like a serial killer. I don't smoke or do drugs.  I don't come with a rider of outrageous demands. I won over my first roommate by wearing a cool necklace. A NECKLACE.

When did the nyc housing market become more competitive than the job market or the dating market? I had Plan A (to get my own place) and Plan B (to find a new roommate) and I'd made peace with the fact that Plan A was not feasible with my current income and in this market, unless I wanted to live somewhere so far out that you have to take a bus just to get to the subway. Or else live next to the airport. I was ready to accept the realities of having a roommate again, but now even that wasn't working out?!

The clock was ticking!
The hourglass was emptying!
Another dramatic metaphor for running out of time!

Finally, with two days to go before I was to vacate my apartment, I gave up.

I hired movers to take all my stuff to a storage unit, I packed a duffel bag and I went to a friend's apartment. (PLAN C, otherwise previously known as 'Plan C but that will NEVER HAPPEN oh my god can you even IMAGINE?!)

You know you are blessed with some amazing friends when they are willing to take you in when you literally have no place to live and are so exhausted you keep breaking out in fits of maniacal laughter because the situation got so hilariously out of hand. If my friends weren't so awesome, I would have had to move in with my parents in the suburbs of CT and endure the soul-sucking commute on Metro North each morning. And then I would have gotten sick of that and quit my job to start a new life on my parents' couch, spending my days making crappy art work to sell on etsy while I worked on 'finding myself'. Thankfully, I was saved by one such amazing friend (and several others, whose guest rooms and couches I will be visiting soon.)

Obviously, things could have been much worse and I am thankful for the things I have and the people around me and know that despite some set backs, I will be fine. All this is true. But let me tell you, these have been some dark times. It's hard when the life you envisioned for yourself doesn't match up with what the world has in store for you. That's so cliche I want to punch myself in the neck for even typing it but it's also true.

So that is why there are no posts about my new apartment and adventures decorating it. No fun DIYs or dramatic unveilings. No makeovers or diagrams or wishlists.

For now, I'm regrouping and taking some time to figure out what my priorities are. The silver lining of this whole situation is now that I don't have a set moving date to adhere to, I can take my time to find the right solution whether that means finding someone with a room to rent, finding a roommate to search for an apartment with or finding my own place. Perhaps I simply wasn't meant to have my own apartment yet. Perhaps I wasn't meant to live with the girl who is a nudist (no judgement) or the couple that preferred I shower at the gym instead of in their bathroom. Perhaps I would have settled for something that would have turned out to be less than ideal, just because I was running out of time.

Perhaps time is actually what I really needed. Which means Mick Jaggar was correct, Sometimes you can't always get what you want.

But you get what you need.

Sometimes I like to amuse myself by visualizing new color combinations in unexpected spaces. This is one of those times.
A few years ago while working at Kate's Paperie, I became obsessed with a set of Kate Spade stationery that featured a retro variation of postal stripes in navy, red and pink. Kate Spade recycled the same pattern last year with some variation in tone and color on a candy bar clutch and I've been utterly smitten ever since.

Enough about stationery and purses though- what I really care about is decorating. How would this combination work in a room? Navy is such a traditional and conservative color but a bright pink could make it really fun and adding in red accents would balance out the youthful aspects of hot pink. I can easily see it working in a bedroom or living room with all the textile and upholstery possibilities. Here are a few examples via Pinterest:

I like a good challenge so I started thinking about how these colors would look in a kitchen. Dark counters and a textured rug anchor a lighter table and counter top which leaves room for plenty of punchy accessories. Pretty cute, right? 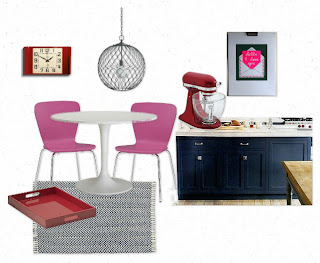 For the three of you who read this blog, sorry I haven't written in a while. I know you are very sad. And I also know you talk to me every day and therefore don't care much. But nonetheless, I need to start blogging again. For my own sanity. And also so I can post decorating ideas I want to make sure I remember, which is the whole reason I started this blog in the first place.

Oh hey and also, I'm moving into my very own apartment soon! Yes, I will FINALLY be living by myself. It is a little scary, but I'm moving forward. So get ready world, this apartment will be full of sequins and creepy old portraits of people I don't know. It will have crazy rugs and as many throw pillows as I want. (Which is means A LOT)  It will have decorative objects in random places and artwork in the kitchen. It will have hot pink and mint green even though no one thinks they look good together but me. It will have fresh flowers all the time and a real TV stand. Lack tables will be banned from the kingdom that is my new home.

All these things will happen, I promise.

In the meantime, I will probably spend the next 2-3 months fantasizing about stuff I need and want and DIY projects I will do and comparing paint colors and upholstery fabrics. In short, I will be in heaven.

Or at least, you know, pretend. For my sake.


Want to relive my past moving experiences? (Because, why wouldn't you??!) Check out these older posts:
Moving is Hard Y'all!
Big News
We are so behind

I hate good taste. It’s the worst thing that can happen to a creative person. – Helmut Newton

Also I like interior design. A LOT. Since I tend to bore most of my friends with my opinions on everything from wallpaper to wall art, I'm posting them all here!